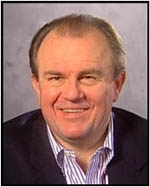 I was born a working class guy. My grandparents on my mother's side emigrated from Poland. That grandfather worked in a factory in the town where I grew up near Pittsburgh. My father's parents were born in the USA but never went to school. My grandmother started work as a domestic when she was 10. My grandfather went to work in the coal mines of Central Pennsylvania when he was eight.

My hometown was a company town called Ambridge PA, so named because the American Bridge Division of US Steel was headquartered there. My dad was an hourly worker for American Bridge for almost 40 years. My mom worked as a checkout person at a local supermarket and then as an office manager for a K Mart store.

Neither of my parents got anywhere near a college, but education was a big thing in our house. All I heard growing up was "go to college, go to college." I worked hard and got good grades in high school. I graduated from Penn State in 1972. I did a year of service as a VISTA (Volunteers In Service To America) Volunteer, and then began my career as a trainer working for the government training other people to become VISTA Volunteers.

I knew that I didn't want to spend my career in government, so I went to school at night to get a Masters Degree - two years, 5:30 & 10:30 for four nights a week. I worked full time and went to school full time, graduating with a 4.0.

Then I got my first job in business. It was in the training department of a large Oil Company. I worked hard, did a good job and kept getting passed over for promotion. The reasons were vague "'you've only been here a little while,' 'the hiring manager thought the other person was a better fit,' 'you need to polish up some of those rough edges.'"

So I found another job; this time with a Chemical Company. I worked hard, did a good job, got good performance reviews and no promotions. I was frustrated. In my heart of hearts, I knew I was as good or better than people who were moving ahead while I was standing still.

I decided that maybe more school would be the answer. I quit my job, and enrolled in a PhD program in Adult Education and Organizational Behavior at Harvard. Once I got there, though I realized that the same thing happens in academia as happens in business. The hardest workers and best performers don't always get rewarded and promoted.

I decided that I had an opportunity to use my situation as a lab. At Harvard, I was surrounded by high performers - people who had achieved a lot at an early age, and seemed destined to achieve even more. I decided that maybe I should pay some attention to these folks.

I got one of those marble covered notebooks and made a list of all the people I admired at Harvard, all of the people in the companies where I had worked who got the promotions I didn't, and the people who had been role models to me in my life. I started reading biographies of successful people - the list was varied, people like George Washington, Thomas Jefferson, Benjamin Franklin, Martin Luther King, Malcolm X, Gandhi, Nelson Mandela, Winston Churchill, etc. etc etc. I created a page for each person. I started writing down the characteristics that I observed in these people. When I was finished, I had a notebook full of the characteristics I observed in successful people.

It was a long list. So I did kind of a human regression analysis on it. I started looking for patterns and groups of behaviors. When it was all said and done, I found four distinct characteristics that the successful people I had studied had in common.

They all:
. Had a clearly defined purpose and direction for their lives.
. Were committed to succeeding. They faced obstacles and overcame them.
. Were self confident. They knew they were going to succeed and continue to succeed as they went through life.
. Shared some basic competencies. They knew how present themselves in a favorable light. Other people were attracted to them and wanted to be around them. They were high performers. They were great communicators. They were good at building relationships.

Once I finished my degree, I took a job with a very large pharmaceutical company in New York. I started applying the lessons I learned from observing successful people -- and I began getting promotions and good assignments. I became the confidant of several senior executives and I began coaching up and comers in the company , teaching them the basic principles I had discovered by writing my observations in that marble covered notebook.

I also kept refining my ideas, making them easier for others to understand and apply. You never learn something as well as when you teach it. I became the most sought after internal coach in that company.

In 1988, I was faced with a decision. Accept a big promotion to Vice President, or strike out on my own. I decided that I have an entrepreneurial bent and chose the latter. I opened up a small consulting, coaching and speaking business. The idea was to reach even more people with what I knew about creating a successful life and career.

For many years, I thrived as a corporate consultant. Then I got cancer and survived. I realized that there was more to life than working as a high paid consultant. I realized that I had an opportunity to reach even more people with my common sense message about career and life success; people I would never get a chance to meet working one on one with executives in very large companies.

The Career Success GPS system is based on four simple but powerful common sense ideas.

1. Clarity of purpose and direction
2. Commitment to taking personal responsibility for your life and career.
3. Unshakable self confidence.
4. And a set of specific competencies you must master in order to succeed.

These four Cs - clarity, commitment, confidence and competency have guided me on my success journey, and I'm sharing them with you so they can guide you on your personal journey to the career and life success you want and deserve. Let's look at them in a little more detail.

There are three keys to developing your clarity of purpose and direction. You have to:
. Define what success means to you personally.
. Create a vivid mental picture of yourself as a success.
. Clarify your personal values.

There are three keys to committing to your success. You have to:
. Take personal responsibility for your success.
. Set high goals ? and do whatever it takes to achieve them.
. Choose to respond positively to people and events.

There are three keys to becoming self confident. You have to:
. Choose optimism. Believe in your heart of hearts that today will be better than yesterday and that tomorrow will be better than today.
. Face your fears and act. Don?t let your fears paralyze you into inaction. Self confident people act.
. Surround yourself with positive people. Jettison the nay sayers in your life.

I know this sounds like a tall order when you see and hear it like this. These ideas can be a bit overwhelming. That's why I write a daily blog -- to help you learn from my journey. Check it out at www.BudBilanich.com.